What does this silhouette say to a modern viewer? Does it remind you of Carnival of Venice masks, or the mysterious character from V for Vendetta? Maybe you are reminded of the goggle-donning steam punk, or perhaps it just resembles any vague nightmare—a bird-like monster clad in a broad-brimmed hat. Whatever the association, this particular costume does not conjure up feelings of comfort and relief. Given its uneasy connotations, would you be surprised if I said that this was the uniform of a medical practitioner? Yes, indeed. This is the outfit of the seventeenth-century plague doctor.

Although this uniform may have been worn prior to the seventeenth-century (1347 marked the first major outbreak of the plague in Europe, followed by another major outbreak in 1665), researchers have only been able to find written and illustrated proof of its existence dating from the 1600s. The uniform consisted of a long leather or waxed canvas over-garment, which gave the wearer coverage from neck to ankle, and waxed canvas leggings and gloves.  A rather incongruous broad-brimmed hat tops the beaked mask with glass-goggle eyes. Although it is quite understandable that a doctor treating plague victims would want to cover their skin from infected bodies, what is the purpose of a long, hooked beak? 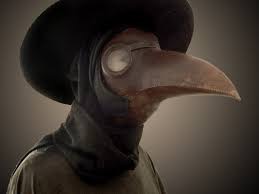 Aside from appearing wholly terrifying, the bird mask had a function in terms seventeenth-century science.  Inside the hollowed out beak the plague doctor would keep sweet or pungent smelling herbs, such as camphor, mint, lavender or even a vinegar soaked sponge. This practice was in support of the “miasma theory” of infection, which theorized that disease was spread by bad smells. It would take a couple of centuries for germ theory to come along and debunk this notion, but during the 1600s the miasma theory, and its accompanying plague doctor uniform, was at the forefront of medicine and innovation.

The figure most associated with the plague doctor uniform is Charles de Lorme, who was the principal physician to Louis XIII. He had written detailed descriptions of the uniform:

“The nose is half a foot long, filled with perfume with only two holes, one on each side near the nostrils, but can suffice to breathe and carry along with the air one breathes the impression of the herbs enclosed further along the beak….”

Charles de Lorme would have understood that the best way to protect himself against the ravages of the plague was to combat the foul miasma with flowers and herbs. Now, that’s “flower power.” Aside from a handy perfumed mask, plague doctors often carried wooden canes, which are thought to have been used to keep diseased patients at a distance.

Despite the “functional” aspects of the plague doctor’s uniform, I cannot help but focus on the disturbing appearance of the ensemble. It is doubtful that if I lay on my death-bed— bubous bursting under the skin—I would be soothed by the sight of a creature, half-man, half-beast. I am reminded of otherworldly beings: the anthromorphic gods of the Native Americans, Africans, Indians and Egyptians. These figures are associated with magic and the mysterious unknown. They are separate from the human world, although they act as intermediaries. 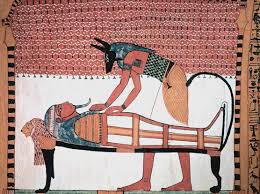 Primarily, I am reminded of Anubis, the jackal-headed Egyptian god who was responsible for weighing one’s heart in the afterlife. During the late pharaonic era (664-332 BC), Anubis is associated with guiding individuals across the threshold of an earthly existence to the afterlife.  When one’s time has expired on earth, Anubis would see to it that one made it to the next chapter. To me, the plague doctor appears to be a messenger from the other side. Someone who is experienced in ritual passage. Whether he ushers mortal souls to a heaven, or hell, to the jaws of the crocodile headed Ammit, or simply to return to the soil, the plague doctor is a symbol of transition.