November 5th is Guy Fawkes Day— a jolly good holiday for British folk where fireworks are set off & Union Jacks are waved. But why? And who the hell is Guy Fawkes?? 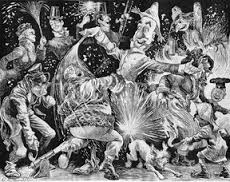 If these are questions which have troubled you every time November 5th rolls around, & caused you sleepless nights of wonder, read on. If you’re just mildly curious about this Guy Fawkes chap, please do read on. If you don’t give a rat’s behind about British holidays, stop reading right now. You and I are two very different sorts of people, and this post is not for you.

OK, let me start by saying that Guy Fawkes is not a 1970’s game show host, even though his name is really snappy sounding. Guy Fawkes was, in fact, a 17th century conspirator who nearly blew up Parliament and all of the dukes, lords & anybody who was anybody in 17th century England. Hell, he nearly blew the king of England to kingdom come.

You see, Guy Fawkes & a handful of his friends were fed up with King James I & his tom foolery. James I imposed heavy fines on Catholics, banished priests, stamped out Puritans & was convinced that, ‘Kings are justly called gods’ (which was news to the British people post-Magna Carta era). The only sensible thing to do about King James & his crooked government was, well….to blow it up. 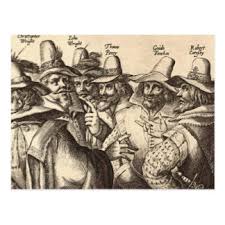 You might ask yourself, how does one go about exploding an entire government building? Well, in 1605 the answer was gunpowder. Lots & lots of gunpowder. Guy Fawkes & fellow conspirators secured a lease to the basement beneath the House of Lords (the place in Parliament where all the British big wigs in government convened). Then the conspirators did what any reasonable group of similar-minded people would do with a basement – fill it with gunpowder.

Guy Fawkes was in charge of guarding the gunpowder, which was too bad for him because when authorities were tipped off about “The gunpowder plot”, Guy was the one found in the basement of Parliament with a conspicuous stock of explosives behind him, a fuse in hand & a dumb look on his face…”Duh…what explosives?”

Well, on November 5, 1605, old Fawkes was arrested & tortured (standard procedure). For the people’s entertainment, he was set up on a big scaffold to be ‘hanged, drawn & quartered’. Everything was going swimmingly until Guy ruined it all by jumping off the scaffold, thus breaking his neck. The hapless Guy Fawkes was put out of his misery & the crowd of spectators was sent home without a good show. Too bad.

To make up for it, Parliament passed an act which designated every Nov. 5th as a Day of Thanksgiving: the King & Parliament were saved! Hooray! Fast forward 400 years to the present & you’ll find that people have pretty much forgotten about King James, & go about hailing Guy Fawkes as the real hero. In celebration of Guy Fawkes rebellious spirit and fondness for gunpowder, the British hail their boy by burning an effigy of him in a big bonfire. It’s only appropriate. 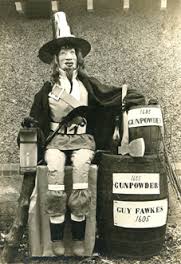 I could say a whole lot more about Fawkes & his lifetime, but I’ll leave that for a future dissertation. Instead, I’m going to sum up Fawkes with a quote made by some really clever person. It goes like this, “Guy Fawkes was the only honest man ever to enter Parliament.” And that, my friends, is all you really need to know!

(A quick caveat: this post was written out of humor and a deep fondness for British history! Love-LG)