If you’re like me, and you have a penchant for attracting liars, cheats, and emotionally hollowed-out husks of men, do yourself a favor and date yourself. Style that hair, strap on your best shoes, and go out into the world, confident that your favorite heels would never let you down. Literally. Personally, after being thrown into an unwanted girlfriend receptacle by my ex, I picked myself up out of the the heap, and looked into a bright future of hot dates with myself!

For date number 5, I thought that it might be best to pull out all of the stops. Really impress myself. I wanted the museum, the mansion and the garden experience all rolled into one delectable date! Perusing the internet during the summer of 2017, I discovered that the FDR Presidential Library in Hyde Park, NY was having an exhibition titled “Images of Internment: The Incarceration of the Japanese Americans During WWII,” featuring ephemera, documents, and over 200 WPA photographs of the wasteland habitat carved-out for Japanese Americans by the impetus of Executive Order 9066. If anything else, this date would fashion an entire new appreciation for my mobile freedom. 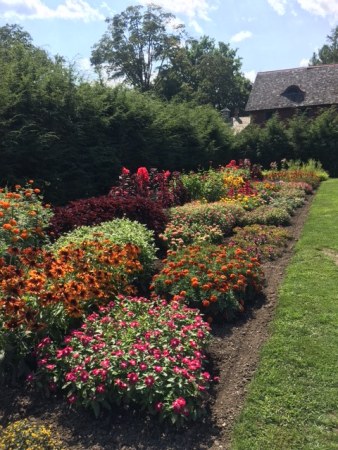 I began my date by taking a tour of Franklin D. Roosevelt’s home, Springwood. It was the place that he was born, rode pretty ponies as a boy, retreated during his Presidency, and, after he died, came to rest in the rose garden– along with his wife and my girl, Eleanor Roosevelt, and faithful dog, Fala. But, we’ll visit the gang in the rose garden a bit later on my date.

The romance of my date with myself began at the Henry A. Wallace Visitor Center, where  I, along with a jolly band of tour goers, gathered around a pictorial mosaic floor map of FDR’s childhood neighborhood. This set-up allows for moments of intense geographical study, wistful daydreaming, and casual people watching while a knowledgeable U.S. Park Ranger tour guide fills you in on local history.

After gaining a better grasp on local topography, it was time to walk over to the Springwood home, which was purchased by FDR’s father, James Roosevelt, in 1866. In 1882, Franklin D. Roosevelt made his grand entrance into the world within the walls of Springwood, and would later come to live there with his mum, Sara Roosevelt, and his fantastically wonderful– though genetically too close for my modern comfort– cousin and bride, Eleanor Roosevelt. In 1915, FDR and his mummy dearest, Sara, decided that the home was too small for a growing family, and hired the Hoppin and Koen architectural firm of NYC to add two additional wings to the original house, resulting in a charming Colonial Revival-style structure, with field stone facade, and columned portico. Some rather handsome ivy has taken residence on the outer walls, and spends its time on the portico with 100 year-old potted palms. What fun! 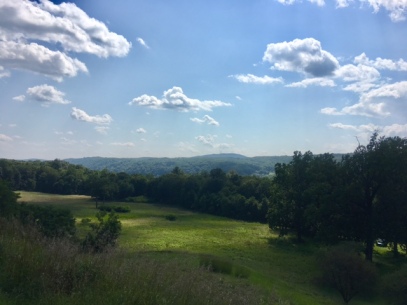 View from Springwood Home of the Hudson Valley

Stepping across the threshold of Springwood is like entering a time capsule, which was permanently suspended in the year of 1945– the year of FDR’s death. As per his request, the Springwood estate and property was donated to the public, and given to the U.S. Department of the Interior, where it has since then been maintained as a National Historic Site. The home boasts some interesting ship and sailboat paintings (FDR was a great collector of them– among other things), a fun game of Parcheesi from the 1940s (I’m dying to know who won the game!), and all of Sara Roosevelt’s encroaching floral curtains. After FDR’s death, Eleanor Roosevelt remained in her personal home on the estate, Val-Kill, which you can visit.

After exiting the house, I wandered to the Franklin D. Roosevelt Presidential Library by way of the garden, and said hello to the bones of FDR, Eleanor Roosevelt, and little dog, Fala. (They were enjoying the pleasant sunny weather!). After paying my respects, I finally made my way to the library and museum, where I could enjoy the “Images of Internment: The Incarceration of the Japanese Americans During WWII” exhibition, which was tinged with bitter sweet irony, since it was FDR himself who signed into order the awful Executive Order 9066.

After the bombing of Pearl Harbor, fear and rumors stirred together on the west coast of the U.S. to create an ugly cocktail of racist sentiment and xenophobia. In response to the spread of fear, hatred and political pressure, FDR signed Executive order 9066, authorizing the Secretary of War to designate certain areas as military zones, which allowed for the incarceration of over 120,000 people of Japanese descent: 70,000 of which were American born citizens, and none of which were found guilty of espionage or sabotage.

Entire families were taken from their homes, losing businesses and belongings, and placed behind barbed wire in some of the most desolate and lonely landscapes of the American West. Some of the photos displayed at the exhibition were taken in camps such as Heart Mountain, and Manzanar, where windy, wet winters, and dusty, dry summers chafed at the people who lived in flimsy plywood homes. 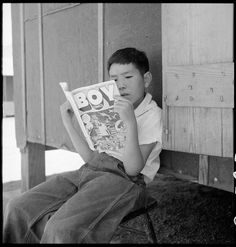 However, the incarcerated prisoners made the best of the situation, setting up schools, ballet studios, newspapers, and even screen printing shops. As a super tangential side-note, some members of the Internment Camps joined the 442nd Regimental Combat Unit in 1943, becoming the most highly decorated unit for its size and length of service in U.S. History. Coming from the wastelands of the American West, their motto was appropriately “Go For Broke.”

All of the photos exhibited an interplay of darkness and light: hopeful smiles from children set in a barren dustbowl; unflagging athletes competing in games with a barbed wire backdrop; proud graduates donning a cap and gown, trapped in place of confinement. Of course (because I cry like three times a day for fun), these exquisite photos brought tears to my eyes. I was reminded that even in the depths of sadness and strife, there is hope of happiness if one is strong enough and willing enough to alter their perspective. And just like the little girl, flying through the air on a swing in Hikaru Iwasaki’s photo (1943), I, too, have seen a beautiful place for myself on the horizon.