Winslow Homer’s Eagle Head, Manchester, Massachusetts (High Tide), which is exhibited in the American Wing of the Metropolitan Museum of Art, represents a transitional period in American art, clothing, and society. Embedded within the appearance of the three young women on the seashore, rendered with lively brush strokes, is a cultural cocktail of change and modernization. When Homer displayed this particular work at the National Academy of Design in 1870, critics reacted with uncertain, if not hostile remarks about his treatment of his female subjects and his overall painting technique. What Homer captured so aptly in this painting was a cultural undercurrent that was traveling just below the surface of Victorian mainstream ideals of “modesty, moral integrity, self-control, sober earnestness and industriousness.”Under the veneer of Victorian society, a natural world was pulsing.

Homer was an American-born genre painter, who depicted everyday American life with sensitivity and vigor. Unlike his romantic predecessors who depicted highly polished interior scenes or grandiose landscapes which echoed the sanctity of a holy church, Homer turned his attention to the home-spun American scene, with a “native and personal” naturalism. His illustrations and oil paintings of Americans participating in outdoor leisure sports were a new theme in painting, and for which he produced a prolific number of examples. The fact that he was painting during the height of the Hudson River School Movement was quite influential to his work since the Hudson River School stressed that artists should go outside of the studio to capture natural light.

However, Homer’s summary hand and the “unfinished” look of his antebellum paintings was a departure from the Hudson River School tradition, which subsequently drew much criticism from contemporaries. Harper’s Weekly commented on Winslow Homer’s High Tide exhibited at the 1870 Academy show, stating: “The pictures are not wholly pleasing; perhaps the bathing scene—like another he has in the East Room—is not quite refined. But this picture shows a fresh eye and a wholesome independence of conventions with spirit and vigor…If the critics must gibe, it must not be at such work, however faulty, but at the hopeless, conventional, dead, and buried commonplace of many of the pictures, but suggest nothing but that the painter has seen nature only in very namby-pamby engravings. In the works of Homer…you are very sure that the painter has really seen what he paints, and really tries to represent it. When he fails, he is, therefore, a hopeful failure.” Homer was, in fact, just painting ahead of the curve. He is considered to be one of the forerunners of Impressionism, along with Boudin in France and Fattori in Italy.

While critics picked apart the “homeliness” of his subject matter and the lack of refinement in his painting surfaces, the American public embraced his work, and the National Academy elected him an Academician when he was a young man. At least one critic had this generous statement to make about Homer’s work, “Mr. Homer goes in, as the phrase is, for perfect realism, and cares not for such fantastic hairsplitting as the distinction between beauty and ugliness. He is a genuine painter; that is to see, and reproduce what he sees.”

The swimsuits that appear in Homer’s painting, High Tide, are the result of a compromise between Victorian social mores, fashion, and function. While it was considered immodest to expose the shape of the female leg, even when it was covered with stockings, weighty swathes of material made it physically impossible and dangerous for women to swim. The bathing suits popular from the mid-nineteenth century to around 1870 were a sartorial settlement between modesty and function and were typically made of serge (a wool fabric) or flannel. The weighty material was fashioned into a paletot dress, which had a cinched bodice and short skirt that stopped at the knee. Underneath the paletot dress were ‘Turkish’ trousers or bloomer-style pants.

Around 1848, dress reformers introduced the ‘Turkish trowser’ to lady’s fashion, in an attempt to free the female body up for engaging in more physical activities like popular “water cures”, or, in the case of Amelia Jenks Bloomer, bike riding. Just a few years prior to 1848, bifurcated undergarments had been slowly incorporated into middle-class women’s wardrobe. Such controversial undergarments made headway for bloomers or Turkish trousers.

However, the look of women wearing trousers in the nineteenth century did not catch on with mainstream fashion, and magazines like Punch often poked fun at women who wore such emancipated attire.  The satirical cartoons in Punch magazine were a more humorous reaction to male fear that women were “appropriating male dress, and, by association, male privilege, and power.” Because the trouser for women threatened the foundational gender codes of the Victorian era, bloomers and Turkish trousers were typically only worn when pursuing genteel pursuits of recreation and were made less threatening to the male sartorial sphere by incorporating current female fashionable silhouettes and details into the overall look of the sportswear.

Apart from the main body of the bathing dress, oiled linen caps were worn to protect the hair, while straw or sunhats hats were worn to guard the face against sunlight. In addition, lisle gloves were shown in fashion plates of the time to protect the hands from the sun, and gum shoes to protect the feet. While historians and mid-nineteenth century fashion magazines imagined Victorian women in bathing suits which covered them from head to toe, complete with black stockings, gum shoes, a linen cap, sunhats hat, gloves, bloomers or Turkish trousers, and a shirt dress over a short dress, an illustration by Winslow Homer, which appeared in Harper’s Weekly in 1858, gives us another glimpse into the world of Victorian sea bathing. Women appear swimming alongside men, and bare feet, naked calves and arms, and elbows can be observed bobbing out of the waters in the illustration. Although ladies wear straw hats on the shore, the women swimming in the ocean only wear their linen caps. 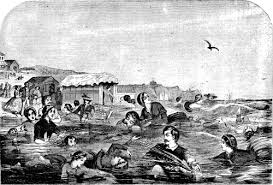 Patricia C. Warner uses this particular illustration by Homer to argue that contrary to some historians’ beliefs about mid-nineteenth-century sea bathing, women did not always wear every article of clothing prescribed by fashion plates from the time.  Homer, with his tradition as a genre painter and his acute eye for detail, captured the actual way in which women wore bathing suits, unencumbered by excessive articles of clothing and material, like gloves, straw hats, shoes, and trousers. Furthermore, Homer was hired to record what he saw for the magazine, not reinterpret it.  The fashions for bathing suits scarcely changed between 1858 and 1870, so his illustrations of sea bathers for Harper’s Weekly and oil painting, High Tide, reaffirmed this image of young women swimming at the seaside with their bare legs exposed. Victorian art critics, viewing paintings from terra firma, may have been shocked by Homer’s realist rendering of “exceedingly red-legged and ungainly,” young women, but for enthusiast sea bathers, such opinions about the immodesty of bare skin might not have mattered. While the wearing of black stockings with a bathing suit was popular for American women from the mid-nineteenth century and into the twentieth century, it is highly likely that some more forward-thinking or active women saw fit to remove their stockings while sea bathing. 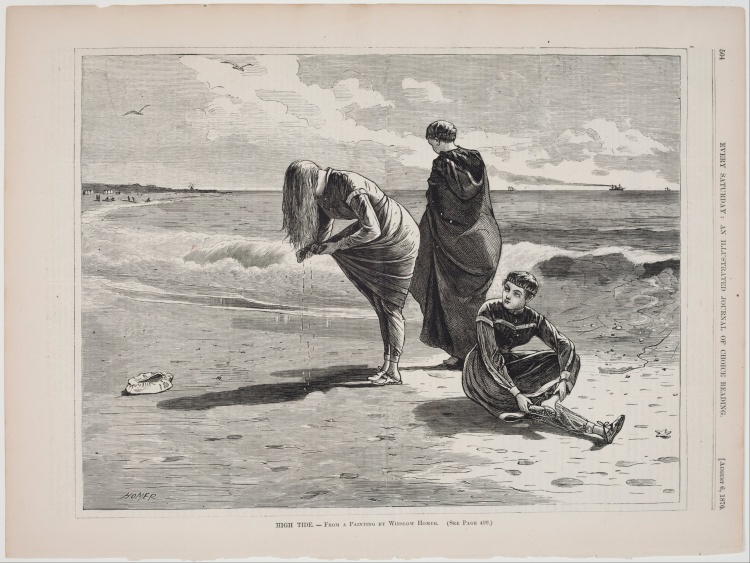 There were two imperatives for preserving the social status of middle-class beach-going women: safeguarding white skin against sun exposure and conserving one’s modesty, by way of concealing the body’s supple contours beneath ample clothing. The breach of these two precepts in High Tide caused negative reactions from critics after he displayed the piece. In this painting, the maintenance of the young lady’s lily-white skin is in jeopardy while the two figures in the foreground expose their bare legs and faces to the sun. White skin was a marker of nineteenth-century beauty and class, indicative of a life spent indoors in the domestic sphere, and also of a woman’s delicacy and refinement. Milky-white skin was preferable.  Evidence of this preference for white skin during the Victorian era can be surmised by looking at the cosmetics which were on the market during the mid-nineteenth-century, such as “Rowland’s Kalydor,” which claimed in its advertisement that it had power to “cool and refresh the face and hands of ladies and all exposed to the hot sun. It removes freckles, tan, sunburn, redness, and roughness.” This Victorian beauty ideal for white skin, and subsequent rejection of tan and red skin, explains the negative reaction one critic had to the exposed red skin of the young woman in Homer’s painting, High Tide, calling one of the figures “exceedingly red legged and ungainly.”

There is one more cultural aspect that can be ascertained from the appearance of the young ladies on the beach: the mid-nineteenth-century development of the idea of leisure time and recreation, in the wake of urbanization and an expanding middle class. Urbanization and industrialization began to replace agrarian life in America, and thus the way in which time was spent moved away from the rhythms of the natural seasons and became more in tune with the rhythms of capitalist industry. The stress from “unnatural” modern life, formed by a shift from an outdoor existence to an indoor existence, created a need for leisure and recreation for the middle class, and “natural” spaces where the bourgeoisie could retreat to became a necessity.

By 1840, there was a boom in the creation of mountain and maritime resorts to meet the demand for recreation and leisure. It was also during the mid-nineteenth century that public parks were being constructed to better the lives of urban dwellers, as in the case of Central Park, in New York City, which was designed by Frederick Law Olmsted in 1857. Aside from creating a demand for “green spaces” and retreats to seaside resorts, modernization and industry also made it possible for more Americans to travel and visit remote wilderness areas like mountains and beaches. By 1841, an expanded national railway system enabled the American middle class to travel to natural havens, like the seaside, in large numbers. These presumably middle-class girls which appear in Homer’s painting, High Tide, occupy the space of a beach in Massachusetts because of new middle-class concepts of leisure and recreation, and because of innovative industry and technology which allowed for extensive travel.

These three young ladies represent a number of changes occurring in America during the mid-nineteenth century. Hidden in the contours of their bodies lies a message about the advent of impressionist painting, the introduction of activewear for women, and the emergence of leisure and travel for a burgeoning middle class.

Patricia Campbell Warner, When Girls Came Out to Play: The Birth of American Sportswear. University of Massachusetts Press, Boston, 2006.

“The Hudson River School”. Heilbrunn Timeline of Art and History. The Metropolitan Museum of Art. (http://www.metmuseum.org/toah/hd/hurs/hd_hurs.htm)