I’m sitting in a beach-house in Lauderdale by the Sea. It’s my break from school, and I’m having a difficult time slathering sunscreen (SPF 30) and joining my merry holiday party on the beach. Too much relaxation generally scares me, and on this trip I’m terrified. With no papers due or readings to debate, I feel as if I have been unmoored—bobbing about aimlessly in a sea of relaxation and sloth. Ah, well enough about my troubles. To remedy my fear of having fun, I decided to create a project of vacation-size proportions for myself, assigning real-life, honest to Zeus women to the nine Greek Muses: Calliope, Clio (my personal favorite), Euterpe, Erato, Melpomene, Polyhymnia, Terpsichore, Thalia and Urania. Today, I begin with Calliope:

Calliope is the Greek Muse of epic poetry. Surely, if one wants to be inspired in an epic way, the bad-ass Bessie Stringfield fits the bill. Now, any epic saga should have a hero born out of strife, and Bessie was certainly met with some hard-times. Born in Kingston, Jamaica, in 1911, her parents moved the family to Boston when she was very young, and after their unfortunate passing, Bessie was adopted by an Irish woman when she was five. She found herself an orphaned black girl, lodged in the societally sticky early 1900s. And though she was met with quite a bit of resistance from patriarchal, white-washed America, Bessie didn’t give a damn. She was a spirited lady with a motorbike.

When Bessie turned nineteen, she got herself a 1928 Indian Scout motorcycle and made several cross-country trips, funding her travels by performing motorcycle stunts in carnival shows. It might seem as if Bessie had found freedom on the open road, but she was often denied accommodations at motels because of her skin color, and had to sleep out in the open, on her motorcycle at filling stations. Because she was a female, she was many times denied the prizes that she won in flat-track races. 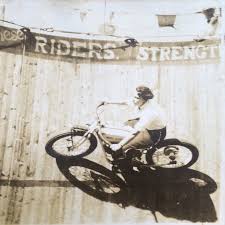 But, such circumstances did not keep Bessie and her motorcycle down. During WWII, she became the only woman to serve as a dispatch rider for the United States Army, delivering documents to domestic Army bases atop her breezy blue Harley Davidson. It was a grueling and dangerous job—one which bad-ass Bessie was perfectly suited for.

After the beaches of Normandy had been stormed, and WWII passed into the annals of history, Bessie’s job as a courier for the U.S. Army ended. She moved to Miami, Florida: land of sunshine and racism. Bessie was repeatedly pulled over and harassed by the Miami police. Apparently, black women weren’t allowed to ride motorcycles. But, apparently, they had never met Bessie Stringfield before. 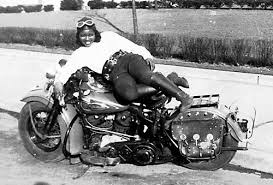 Bessie went on down to the police station, and met with the police captain to discuss the issue of her driving her motorcycle. They convened in a nearby empty lot, where Bessie could show off her riding prowess; whereafter, the police chief gave her his approval to ride whenever she pleased, and the police never bothered her again. Decades later, I’m sitting here and wondering what exactly Bessie did to change to police chief’s mind. She must have put on one hell of a show to sway the minds of people living in an area rife with racism and sexism and sink-holes. In that moment, she broke ground for both women and African Americans who wanted to ride their motorcycles in freedom. Known as the “Motorcycle Queen of Miami,” Bessie Stringfield is an epic muse. She rode her motorcycle until the day she died.